In contrast to the well-studied classic MAPKs, such as ERK1/2, little is known concerning the regulation and substrates of the atypical MAPK ERK3 signaling cascade and its function in cancer progression. Here, we report that ERK3 interacted with and phosphorylated steroid receptor coactivator 3 (SRC-3), an oncogenic protein overexpressed in multiple human cancers at serine 857 (S857). This ERK3-mediated phosphorylation at S857 was essential for interaction of SRC-3 with the ETS transcription factor PEA3, which promotes upregulation of MMP gene expression and proinvasive activity in lung cancer cells. Importantly, knockdown of ERK3 or SRC-3 inhibited the ability of lung cancer cells to invade and form tumors in the lung in a xenograft mouse model. In addition, ERK3 was found to be highly upregulated in human lung carcinomas. Our study identifies a previously unknown role for ERK3 in promoting lung cancer cell invasiveness by phosphorylating SRC-3 and regulating SRC-3 proinvasive activity by site-specific phosphorylation. As such, ERK3 protein kinase may be an attractive target for therapeutic treatment of invasive lung cancer. 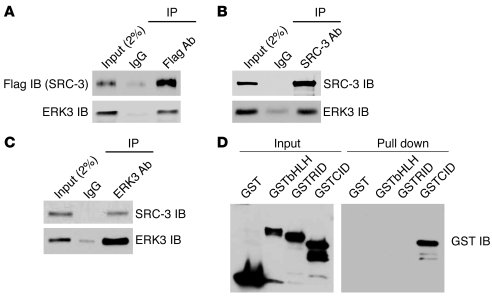 () H1299 cells were transfected with pSG5SRC-3Flag. The interaction between endogenous ERK3 and exogenously expressed SRC-3 was analyzed by coimmunoprecipitation using a Flag Ab or a corresponding control IgG, followed by Western blotting. ( and ) The interaction between endogenous ERK3 and SRC-3 in H1299 cells was analyzed by coimmunoprecipitation using () a SRC-3 Ab or () an ERK3 Ab. () ERK3 interacts with SRC-3 at the CID region in vitro. The N-terminal basic helix-loop-helix domain-containing region of SRC-3 (bHLH), receptor interaction domain-containing region (RID), and CID region were expressed as GST-fusion proteins in . A protein-protein pull down assay was performed by incubating each purified GST-SRC-3 fragment fusion protein with purified Myc-ERK3 immobilized on agarose beads. Western blots were probed with a GST Ab.